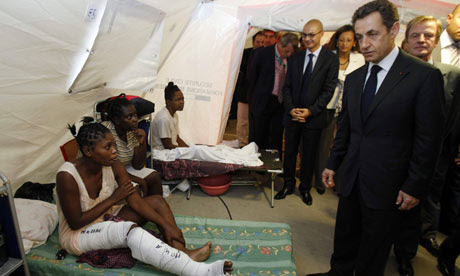 President Nicolas Sarkozy speaks to an earthquake survivor on a visit to a French field hospital in Port-au-Prince. Photograph: Reuters

Nearly seven months after a devastating earthquake killed upwards of 250,000 people in Haiti, UN special envoy to Haiti Bill Clinton told the Associated Press (AP) that international donors have yet to make good on their promises of billions of dollars to rebuild the ravaged country. Haiti’s rebuilding could cost $14bn, according to a recent Inter-American Development Bank study. Yet only “five countries – Brazil, Norway, Australia, Colombia and Estonia – have so far provided $506m, less than 10% of the $5.3bn pledged for Haiti at a March donors’ conference,”according to AP.
On Monday, dozens of leading academics, authors and activists from around the world propose a bold solution to this desperate financial shortfall. Why not reimburse Haiti for the illegitimate “independence debt” it paid France? In an open letter to French President Nicolas Sarkozy published in the French newspaper Libération, 90 leading academics, authors, journalists and human rights activists from around the world urged the French government to pay Haiti back for the 90m gold francs Haitians were forced to pay as a price for their independence.

(Full the sake of full disclosure, I am no impartial observer of the proposal: I helped draft the text of the letter, and played no small role in soliciting the signatures. In fact, the scores of intellectuals I contacted needed little prodding to sign on.) There are “powerful arguments in favour of the restitution of the French debt,” Harvard medical professor Paul Farmer, who was recently appointed deputy UN special envoy to Haiti, pointed out in his testimony in the 2003 hearings in France on Haiti’s independence debt.

This historic payment was patently illegitimate, and, on several different scores, it was also illegal, according to a 2009 paper produced by the Institute for Justice & Democracy in Haiti.Prior to independence, St Dominique – the country that is now Haiti – was France’s most profitable colony, thanks in no small part to its particularly brutal system of slavery. In 1791, the slaves revolted, and in 1804, after defeating Napoleon’s armies, founded the world’s first black republic.Following Haiti’s independence, former French slave-owners submitted detailed tabulations of their losses to the French government, with line items for each of “their” slaves that had been “lost” with Haitian independence.

In 1825, the French King, Charles X, demanded that Haiti pay an “independence debt” to compensate former colonists for the slaves who had won their freedom in the Haitian Revolution. With warships stationed along the Haitian coast backing up the French demand, France insisted that Haiti pay its former coloniser 150m gold francs – ten times the fledgling black nation’s total annual revenues.Under threat of a French military invasion that aimed at the re-enslavement of the population, the Haitian government had little choice but to agree to pay. Haiti’s government was also forced to finance the debt through loans from a single French bank, which capitalised on its monopoly by gauging Haiti with exorbitant interest rates and fees.

The original sum of the indemnity was subsequently reduced, but Haiti still disbursed 90m gold francs to France. This second price the French exacted for the independence Haitians had won in battle was, even in 1825, not lawful. When the original indemnity was imposed by the French king, the slave trade was technically illegal; such a transaction – exchanging cash for human lives valued as slave labour – represented a gross violation of both French and international laws. And Haiti was still paying off this “independence debt” in 1947 – 140 years after the abolition of the slave trade and 85 years after the emancipation proclamation.

A lawsuit launched by the Haitian government to recuperate these extorted funds was aborted prematurely in 2004, with the French-backed overthrow of the government that had had the temerity to point out that France “extorted this money from Haiti by force and… should give it back to us so that we can build primary schools, primary healthcare, water systems and roads”.

With 1.6 million people – over a sixth of Haiti’s population – still homeless after the earthquake seven months ago, justice would surely be better served if the French government instead devoted these public resources into starting to pay Haiti back.

Given the current economic crisis in France, restitution of the Haitian independence debt would be no easy task. When the indemnity money Haiti paid France is adjusted for inflation and a minimal interest rate, its value is well over €17bn. (In fact, in an interview on France 24, Ottawa historian Jean St Vil put the current figure at $40bn.)

Yet it is a demand that many would agree is morally, economically and legally unassailable. But heck, don’t take it from me. Instead, why not ask MIT professor Noam Chomsky, author Naomi Klein, Princeton professor Cornel West, Uruguayan author Eduardo Galeano, French philosophers Alain Badiou, Etienne Balibar and Jacques Ranciere, and several members of parliament in Quebec, Europe, France and the Philippines. In their view, President Sarkozy is bound to make restitution to Haiti for France’s ill-gotten gain.